Safe Search is a Google based program (they call it SafeSearch™) intended to filter out adult material when children are using the internet. It does this by disallowing pages of sites that contain certain unacceptable words as well as by blocking certain websites completely. They also have a very advanced method of looking at images and video to determine if they contain adult content.

SafeSearch works with search engines that have been designed for it, such as KidzSearch.com, although other engines, including Google.com itself support it . However, when KidzSearch is selected as the search engine, SafeSearch is automatically turned on to the highest level of filtering and will always be activated while KidzSearch is being used.

While many people just use Google.com and set filtering to Strict, you need to be aware that even Google’s most strict setting is made for a general audience and not focused on children. As a way of dealing with this, KidzSearch provides several additional layers of filtering to make it suitable for kids.  In today’s world, new words and sometimes even innocent words can suddenly have pornographic meanings. KidzSearch has the ability to quickly become aware of these words, including their spelling variations, in their 10,000+ proprietary keyword database. This is one of the main reason 1000’s of schools trust and use KidzSearch on a daily basis, making it the most popular online safe search website.

This is accomplished through continuous field reports by teachers, parents and a proprietary algorithm evaluating what is being viewed and searched. Any search terms found to be leading to adult material are of course put into the database and used for filtering purposes.

SafeSearch is an important tool designed to keep pornography away from students when they research a project or fulfill an assignment on the internet.  You should choose a SafeSearch children’s search engine that provides the best academic results with the highest level of safety. We feel KidzSearch.com fits this criteria exactly. 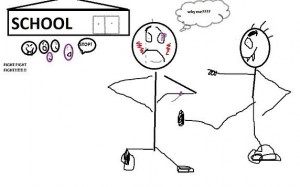 School bullying. Some just say it is part of school life, but for many kids it represents a form of pure mental and physical torture that in extreme cases is enough to result in suicidal acts. Sadly, over 20% of bullying victims actually consider suicide as a way out of it. Victims may also lash out with violence, such as school shootings that are often connected with bullying. Schools definitely need to take responsibility and deal with the situation better. According to dosomething.org, over 3.2 millions kids each year are bullied.  Every day about 160,000 kids are not attending class because of bullying. Close to 20% of all students report being bullied 2 or 3 times each month. 90% of students in grades 4-8 report being a bully victim at one time or another.

Cyberbullying is a newer form of harassment that just makes the problem worse, since it allows a much wider group who may not even know each other to participate in the bullying. Online bullying can take the form of e-mails, text messages, instant messages and chat rooms. Cyberbullies might post private pictures and text about the victim, or in some cases masquerade the identify of the victim and post hurtful things that appear to come from them. The impact of cyberbullying can be very far reaching with the speed that content can spread online. Kids are often scared to tell adults about the bullying with only 1 in 3 of them talking about it.

One of the most startling statistics relates to teachers. Only 4% percent of teachers will intervene when bullying is taking place and a quarter of teachers surveyed see nothing wrong with it! Schools must be held responsible. Parents trust that their children will be properly cared for when they are dropped off. How can we expect students to focus on studying and achievement when they are often afraid to even attend class?

The U.S. Government has even gotten involved and now has an anti-bullying website where they suggest that educators, parents and fellow students all get involved to help stop it. The first step is to try to identify when a student is being bullied. Since most will not tell you, you need to look for signs that may include:

How Do We Stop It?

How do we go about protecting our children?  We at KidzSearch see two main solutions. The first would be to just police the schools and take action whenever warning signs are noticed. The second approach would rely on better communication. The former approach might be best when dealing with severe bullying. Physical abuse should not be tolerated. Schools need to report them to authorities for further action. While it may seem harsh, it is actually no different than what would take place in any company or business if an employee became physically abusive towards another employee, or even gave verbal threats.

Teachers are often the ones most likely to see bullying and need to take action and report it before it gets out of control. However, the same holds true for any school employee. It should be part of their job description. Those who don’t follow it risk losing their position or other disciplinary action. When students see the serious outcomes from bullying, such as getting publicly arrested in front of others, or perhaps even getting expelled from school, they are going to be much less likely to do it themselves. Perhaps a three strikes law is appropriate, so they get up to two warnings before police authorities are called. However, if a child is getting physically abused by a bully, justification to report it without any warnings seems appropriate for the safety of the student.

Other students should also get involved. Anonymous tip lines can be set up to protect those students who care enough to report it. Bullying rarely happens in isolation, so it is very likely that other students are aware of the bullying and can report it.

While policing may be the only solution for some cases, better communication can also make a difference. There are many organizations, often supported by popular celebrities, that make it seem “not cool” to be a bully. For example, Stop Bullying, Speak Up has students take a pledge that involves

Assuming there is no physical harm, in some cases empowering the victim to rise above things, such as getting them to understand how weak bullies really are and that things will get better if they just focus on themselves. One can view feedback from fellow students on a KidzSearch forum thread regarding ways to better deal with bullying. One of the most popular answers given by students on this thread was as follows:

“My best advice is to just RISE ABOVE IT.  Focus on your own goals and achievements and just ignore all those losers bothering you. Your day will come and you will shine above them all. They will live a life of shame that they did this too you.”

Perhaps the best approach is a mixture of policing, better communication, and finding ways to boost the self-esteem of bully victims so they are not as likely to be as much of a victim.

GETTING HELP
Here are some good resources for getting more information about bullying.

If a student is being seriously bullied and perhaps possibly thinking about suicide, these are some helpful phone numbers and links they can use. If the issue is urgent, 911 or local police should be called.

National Suicide Prevention Lifeline
1-800-273-TALK or
1-800-273-8255
suicidepreventionlifeline.org
Important help for anyone in a crisis situation thinking about suicide. Topics they handle include addiction, relationship and family problems, sexual orientation, abuse, depression, and loneliness.

That’s right, if you do nothing, your children will very likely be exposed to highly exaggerated sexual content at a much younger age and way more frequently!

While you cannot monitor your children’s online activity 24/7, there are easy and effective solutions that can help.   Here are our top recommendations:

KidzSearch.com was created by parents just like you. While the search results of KidzSearch are actually provided by Google, it has added custom features to make it easier and safer, specifically for kids. It enforces a special type of Google search results called SafeSearch. SafeSearch results use the most advanced safety algorithms in the world, designed by Google engineers, to filter out adult content. In addition, KidzSearch maintains an extensive list of blocked keywords which remove any pg-13 type stuff that might otherwise get through the standard Google SafeSearch filters. We also have proprietary artificial intelligent systems that are able to identify and flag spelling variations of banned terms. No other system comes close to our filtering and we encourage you to compare different sites.

It’s kind of like Yahoo! or Google, but safe for kids (Yahoo! and Google are NOT safe). To effectively use KidzSearch, we recommend parents set KidzSearch.com as their Browser Home page:

You can also manually turn on the SafeSearch Feature on Google with the following instruction.

However, we do not recommend this because unlike other Google services that are synced to your Google account (e.g. you access the same Gmail account on your laptop and on your smartphones), the SafeSearch Setting is only associated with one computer. In other words, it will NOT work on other computers using Google.com unless you are logged into your account on them and have the correct settings set. If this sounds confusing to you, imagine how confusing this will be for your kids! In addition, Google.com, even with SafeSearch turned on, still has pg-13 and some r-rated type results that are not appropriate for most kids. KidzSearch prevents this results. You can easily test this out by comparing Google.com results with KidzSearch.com results for web, images and video content. You will quickly see why we suggest using KidzSearch instead of this method.

Another big disadvantage of relying on Google SafeSearch settings is that people often need to clear their browser cache.  Even if you don’t manually clear the cache, your computer may automatically clear the cache during reboot, as well as when you use an anti-virus, PC Booster, or Anti-adware/spyware products. When this happens the search results can contain adult content. KidzSearch works the same even if the browser cache is cleared or another computer is used.

Finally, KidzSearch also has a great environment that makes using the internet more enjoyable for kids, such as allowing them to create customized screen backgrounds, fun and safe learning and skill games,  homework help Q&A section, KidzTube handpicked videos, collection of the best websites for kids, kids news, safe kids radio, and much more. It is like Yahoo!, but designed for kids.